Every AWP I buy all of my books for the year. In an attempt to make sure I think a little about each book that I bought, I have determined to write up at least something about each one whether it be positive, negative, a single line, or twenty-pages. I am tired of the boring formality of typical book reviews, so I have decided to post all the reviews on my blog so I can say what I want. Please comment. I want to know your thoughts.

Belmont – a collection of poetry named for the Cambridge-adjacent city near Harvard, where Stephen Burt is employed as a professor of English.

Okay, since this is my blog and I don’t have to play by the regular rules of reviews, let me ask something. Do you ever feel like you don’t like a collection while at the same time knowing that the reason you don’t like collection is that you are being a jerk about not liking it?

I kind of feel that way about this collection. I mean, it’s clearly good. Dr. Burt is wicked smart (I’m currently in Boston) and has a great handle on his craft. Each poem offers the lucidity of a caffeine buzz early in the morning after a good night’s rest when the brain operates on all cylinders, images pop out of the earth, sounds are amplified, and everything slows down like when the apprentice reaches mastery in a martial arts film. And the poems aren’t smart in a pretentious way. They are the good kind of smart that makes the reader feel smart in tandem with the poet. The craft is sharp, the diction balanced, there is wit and poignancy. I audibly said, “aww” out loud several times.

But at the same time I just can’t get past the subject matter. I know I’m a complete ass, but I just can’t make myself care about the luster of suburbia, the soft landings and shiftings of adulthood, the wonder of raising a child. There are some subversive moments in the book regarding Dr. Burt’s gender-queer identity and cross dressing but they only make a brief appearance in the book then disappear without complicating the greater book’s project. Of course, the book isn’t all about domestic life. The middle section focuses on pop culture and has some really fun original poems like “In Memory of the Rock Band Breaking Circus” or “Self Portrait as a Muppet.” These are pop poems and like all pop poems at times they can get pulled out of their kairotic moment when corralled into a collection. So, while most are good, some now feel like yesterday’s hip phrase like “For Avril Lavine” or “Little Lament for the Legion of Super-Heroes.” Maybe Dr. Burt wrote these before the super hero and pop star persona poetry fads of the late 2000’s, but they feel a little out of vogue right now. Of course, that’s just inevitable to a degree. So, overall, I really liked this book. I think I am just a little jaded regarding poems about suburbs and kids since many of my friends are at that stage and I’m decidedly not.

Oh, and I want to say lovely cover and layout of this book. Greywolf press makes handsome books. 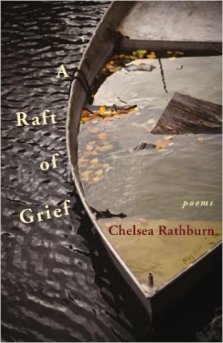 First of all, let me comment on how much I adore the title – Raft of Grief. It’s so unapologetically depressing I start to almost laugh with pleasure when I read it. I love it! This book isn’t shying away from anything. It owns its subject matter with complete confidence. These aren’t happy poems (except at the end of the collection). Mainly, the poems tell the story of a failed marriage through scenes of the couple’s travels around Europe.

I admit that I personally connect with this book. Being a recently divorced Europhile, I too have bickered and despaired in many impossibly beautiful places. I have fumed in old stone porticos, nearly broke down crying in Parisian cafes, and drug my dead shadow behind me while walking past white washed houses backed by bright Mediterranean blues.

There is something about suffering in Europe that makes it so much more terrible. Regret loves a good backdrop. But I don’t think you have to have had bad times in Europe to like this collection. The poems are incredibly smart and well-crafted, observant, and psychologically keen about the nature of relationships. In particular, the sonnets are stellar. “English Sonnet” is perhaps one of the best modern sonnets I have read in recent memory, but I personally like “After Filing for Divorce”

Your paperwork in, it’s like the morning after
a party, the shaken survey of damage,
a waste of bottles where there was laughter.
It all seems so much more than you can manage:
The accusing cups and stubbed-out cigarettes,
The sun assaulting the window, your throbbing head.
It’s not enough to face your own regrets
(though they’re coming back fast, the things you said)
because someone’s trailed bean dip across the table,
someone’s ground salsa in the rug with his shoe.
So you start to clean, as much as you are able,
And think how far those hours have fled from you,
Before the hangover and your sour tongue,
when you felt lovely, and infinite, and young.

That ending kills me! And so many of the poems in this collection hit with an equal force. There is a formal variety in the book, the second section a series of eclogues a little reminiscent of Gluck’s Meadowlands, with the witty jousting between lovers. The last section of the book isn’t all regret. It celebrates a new love with an equal joy to the former poem’s despair. And I think that’s what I really like about this collection; the speakers are genuinely happy when they should be and genuinely sad when they should be. It’s like there is no camera filter on these poems, no unnecessary lenses. The poems go for emotional clarity and look right at it.

Oh, and lastly, any collection that has a poem that alludes to an obscure Silver Jews album in a poem is tops for me. 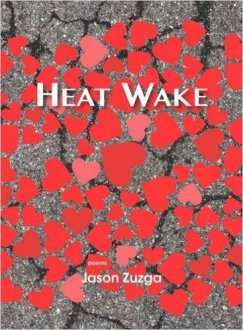 Jason Zuzga
Saturnalia Books, 2016
Full Disclosure: Jason Zuzga is a friend of mine, but I have no connection to Saturnalia books.

It is such a pleasure to finally see a Jason Zuzga book in print. To say this book has been long-awaited by many, many poets is an under, understatement. I was in grad school with Jason in Tucson, 2001. I loved his work back then; everyone did. I don’t know why this collection took so long to bring into the world. Maybe Jason wasn’t submitting enough. Maybe presses couldn’t see what a wild, original, talented mind this guy has. Or maybe the book just took this long to come to its final form. I’m hardly one to talk about publishing slowly.

Heat Wake is everything I am excited about in poetry now. The poems feel odd as the spores on a fern plant at one moment and polished as a limousine the next. You just have no idea where he might go next in such a delightful way. And it always works because the poems are extensions of life and personality more than exercises in craft (though they are also very skillful). I guess what I’m trying to say is that they’re not trying to be something. They are that thing. That is Zuzga’s mind. There are fun, wild associative leaping and tender personal moments, history and science; and everything odd seems personal and everything personal odd. And there is a closeness and humanity to it all underneath. Quoting lines don’t do his work justice, so I’m just going to quote a whole poem here.

Your Age on Other Worlds

Greased surfers on the right,
oil pumping up the left – you drive down the crease
of California as the convexities of boys become
heightened on the waves.

I will guess your age on other worlds.
Stretched into sixteen on all of them. Mine.
When Neptune hurls back around to where it is now
these boys will be decaying
not tucked into their skins not tucked into their wetsuits
not sixteen not alive not riding the waves off California
rubbing itself the way a back shifts.

One night one boy is hurling through time to
the instant he will pass you in the supermarket.
His liverspotted hand a vortex shoves you through
gliding up the crest of time to California.
The pumpers suck sweet sip of time’s decay.

The car drives past you down the crease burning rubber.
The oncoming night glides open and closes and pulses.
Observers lightyears away longingly watch wave
lift you. Look back now to where we were before
this got started – star collapsing,
insane and greedy in the dark.

I mean who does this! Who connects time travel and the sleek bodies of surfers and drive down the coast in such a strange and beautiful way? This collection gets me really pumped about poetry again. Seriously, I would trade this one poem for a dozen other full collections I have read in the past year.

I could go on and on about all the poems in this collection, but this collection makes you want to write your own poems because it just humms with an infectious vitality. So, just use your internets and order it now. You must have it in your life and on your shelf.

The War on Loneliness

How to turn strangers into friends

An Erasure Poem a Day...

~versatility is not an over-rated virtue~

from an outpost in Boise State's English Department and MFA Program

Where Adam Deutsch is at...