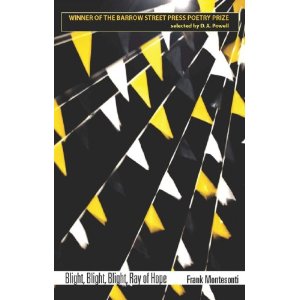 Frank Montesonti’s wit reminds me of the Depression, when all the great novelists wrote dialogue for movies. He can be as glib as the blonde bomb-shell in a 1930s suspense film or as deadpan as the morose sidekick. Not only will he help dump the body, he’ll add the necessary wry comment. ‘It was a very good year [long pause] for the wine.’ Or, better still, ‘I need to tell you something before it’s too late:/It’s too late.’ When the speaker in one poem is asked what a poem should be like, all of his examples include piranhas. Indeed, the dangers of the world are presented as an integral part of a grand comedy. ‘You see, I’m after what’s behind the low-budget scene,’ he writes in ‘Film Noir.’ And, despite all the tricks and effects and zingers, that ingenious mind at work is also revealing the clown’s sadness. That, too, is part of the show. The part where he is one of us.
—D.A. Powell

A Book of Erasure from the original text How To Prune Fruit Trees
by R. Sanford Martin.
Artwork (inspired by the original) by Miranda Polley.

Training, cutting, removing: the language of HOPE TREE in Frank Montesonti’s erasure moves through the seasons: “very little can / be done / cutting / spring from the    inside,” he writes. From a book on the pruning of fruit trees, in which a certain amount of killing is inevitable, Montesonti crafts a book about mortal lives, in which “an imaginary circle / drawn around / the future” may take us only “halfway between the end / without further / pruning.” In this book of instruction and wry observation, carefully gleaned from the vocabulary and metaphor of the orchard, Montesonti has found a way to tell grave truths.
— Janet Holmes

The War on Loneliness

How to turn strangers into friends

An Erasure Poem a Day...

~versatility is not an over-rated virtue~

from an outpost in Boise State's English Department and MFA Program

Where Adam Deutsch is at...